The Nature of the Human Body and of All Things 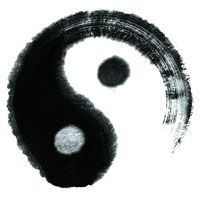 Yin and Yang and the Five Phases have played a major role in the development of medical theory and represent the mainstay of disease identification and treatment.

The concepts of Yin and Yang and the Five Phases were developed by an ancient Chinese agrarian society. These ancient people lived by the natural cycles of the seasons, the weather, crops, herds, the moon and sun, and nature itself. Using their five senses, their intuition, and their creative brains, they developed a system of images and metaphors from the cycles and rhythms of nature to explain what they observed in the human body. This system was fundamental to all natural sciences.

The Human Body in Terms of Yin and Yang

Each of these organs contains with it Yin and Yang aspects.

The two primary substances of the human body, Qi and blood, are also described in terms of Yin and Yang. Blood is Yin in nature: fluid, nourishing, moistening, substantial. Qi is Yang in nature: vital, active, energetic, etheric. Imbalance of yin and yang accounts for the development and emergence of all disease. The nature of the disease and the body's response (or lack of response) are analyzed in terms of Yin or Yang. The infinite number of clinical disease manifestations are ultimately understood and treated in accordance with their Yin and Yang nature.

Yin and Yang define the universe as the interaction of polar opposite forces. The Five Phases theory further differentiates this dynamic into five stages of transformation. These phases represent the seasons of the earth, characterized as wood, fire, earth,metal, and water. These elements correspond with the stages of human life: birth, growth, maturation, death, and rebirth. The movement through these phases is reflected in both the external environment and the human internal environment. These repeated movements are expressed at every level - from the rotation of the planets to the behavior of internal organs.

Each of the Yin organs is paired with a Yang organ, and these pairs share specific meridian pathways, tissues, muscles, and energetic functions. Each pair is affiliated with one of the Five Phases:

The triple burner is subsumed into the fire element.

All of these organ systems function independently and in relation to each other. All of the Five Phases are aspects of Qi.

"Each time I see you I feel better than the time before. Never has seeing a health-care practitioner been so beneficial in such a relatively short time....Thank-you"
- S. Adams

"I am very thankful to have been led to your healing ways. Because of you I am able to maintain a sense of consistency in this stress filled existence of mine."
- D. Alessio